TCA's Young Chiropractor of the Year and Convention Recap

This past weekend Dr. Max attended the Texas Chiropractic Association's annual convention in Austin, TX as the State Director for Distric 11 (Greater Houston Area). While at the convention Dr. Max attended various board and committee meetings as well as some continuing education seminars. Some of these focused on topics such as the future of Chiropractic in the state of Texas and nationally, patient access to Chiropractic, financial oversight of the TCA, and leadership development.
On Saturday evening at the President's Banquet it was a great night for District 11. Dr. Vige presented an award to Dr. Devin Pettiet for TCA Director's Award. One of the more prestigious awards given during the banquet is the TCA's Young Chiropractor of the Year Award. This award is given to a Chiropractor under the age of 40 who has been nominated and voted on by previous recipients of this award. This award is given based on service to the TCA.  This award is kept secret from the recipient until it is presented but not their family who are encouraged to attend and surprise the young Doctor. With a very entertaining who could it be presentation, Dr. Tyce Hergert the previous year's award recipient presented this year's Texas Chiropractic Association's Young Chiropractor of the Year award to Dr. Max. The biggest award of the night was also given to a fellow Doctor from District 11 Dr. Ken Tomlin received the Keeler Award for outstanding career achievement in the field of Chiropractic.
GBC is proud of our very own Dr. Max and the two other members of our area who received awards at this year's convention. 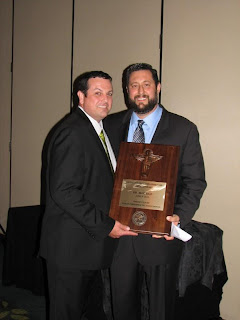 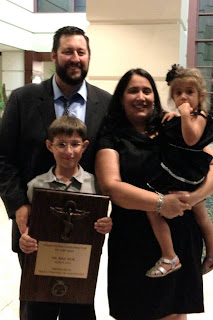 Dr. Max with his wife and children. 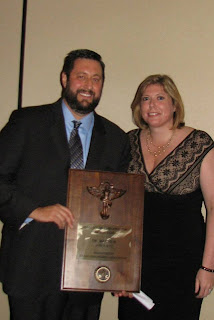